The User takes full responsibility for accessing, using and interacting with the Portal, as well as for all the consequences possibly caused by servicing on the ‘As-Is’ principle. The User takes exclusive and full responsibility for entering contents on the Portal, either in the form of news, pictures, video, comment entry, or any other form of entry. The User agrees with the fact that his content entry will be seen by other users. The User denies every material rights, intellectual rights or copyrights to using the entered material.

The user who enters the news guarantees to be the original owner or author of the entered content. In no case is Portal responsible (legally, materially or morally) for the truthfulness, validity or legality of the content entered by the users or for the consequences caused by publishing the contents. The User takes exclusive responsibility for the content entered as well as for its source. The user agrees not to enter content which spreads national, religious, racial or sexual hatred or to promote legally prohibited symbols.

The user agrees not to use the Portal for advertising, subliminal advertising and entering untruthful offers and frauds in the form of news. The user-reader agrees with the fact that there is a possibility to be exposed to inappropriate, insulting and false contents of news. Portal is in no case responsible for the consequences of such exposure. Neither is Portal responsible for the consequences or damages caused by any part of the entered content, by its interpretations or transmission.

Copying, publishing or distribution of the Portal content is not allowed without quoting the source of information (Portal). It is prohibited to enter news with repeating content.

The user guarantees that he/she is the owner of the user’s account which he/she has opened and that he/she hasn’t registered in the name of somebody else or a company without written consent of the above mentioned. He also agrees the following parameters:

Portal takes necessary measures in order to keep high security standard of data entered on the Portal, but in no case can guarantee the same. The user agrees with the following facts:

The user accesses the Portal via mobile phone at his own risk.

The user agrees not to publish links to web sites, pictures and videos which violate the regulations of this Contract. The User takes full responsibility for entering the data mentioned above. The User authorizes other users and Portal, undisturbed and not entitled to compensation, to use and distribute the data released. In case of dispute due to copyright and other violations, the User who has published a link, audio or visual accessory takes responsibility for the release.

After news release, the user guarantees to Portal globally unlimited, royalty-free right to use, copy, transmit, process, change, release and transmit in any media and in any way of distribution (known at the moment or to be known in the future). The user also authorizes Portal to distribute data. Portal reserves the right to change, shorten or modify the data in order to adapt it to a certain media or distribution channel.

The user agrees with the fact that its content can be redistributed and takes full responsibility for the consequences if it turns out that he was not entitled to release (i.e. if he is not the owner of the content he has released).

The name, logo, page layout of the Portal and the slogan are exclusive property of Portal. The user has no right to distribution of a changed logo, name or modified pages of Portal.

The user can request that content entered by another user, and being this other user’s author’s work, be removed, providing he is able to prove so. In that case, please, describe the case and leave your data, send us a request with your scanned signature and your legal representative’s signature, identify the incriminating content and clearly indicate the access and location of such content.

The user agrees that Portal is entitled to remove such content in good faith but Portal is not legally bound to undertake the removal and it is not liable for not removing the content.

PORTAL, ITS PARTNERS, OWNERS, EMPLOYEES, INVESTORS, AGENTS, CO-OPERATORS AND LICENSORS ARE NOT RESPONSIBLE FOR ANY DIRECT, INDIRECT, ACCIDENTAL, SPECIAL, MATERIAL OR OTHER DAMAGE SUCH AS LOSS OF PROFIT, INTANGIBLE DAMAGES, DAMAGES CAUSED BY LITIGATION AND OTHER DAMAGES CAUSED BY

Any disputes born from or with regard to this Agreement and which may not be solved amicably by the contractual parties (Portal and the user), will be submitted to the competent Court in Zagreb, Republic of Croatia.

This Agreement enters into force on 20th January 2013. 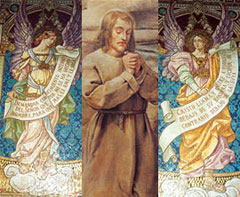 Iñigo stayed in the cave in Manresa about one year. He was sorry for all his sins, and he prayed over the mysteries of Jesus' life. Thus he was the first to go through spiritual exercises under the direction of our Lady, the Blessed Virgin Mary. He recorded the instructions and insights and later wrote a book Spiritual Exercises. This book has been used for centuries by many who wanted to know and follow the Lord Jesus Christ. Today the cave is nicely maintained and is part of the Jesuit church. At the entrance to the cave angels hold the inscriptions with sentences taken from the book Spiritual Exercises written by St. Ignatius in Spanish.

The left angel carries the inscription:

I seek the inner knowledge of the Lord who for my sake became a man so that I may love him and revere Him ever more.

The right angel carries the inscription:

Christ calls everyone under His standard, and on the other side Lucifer under his.